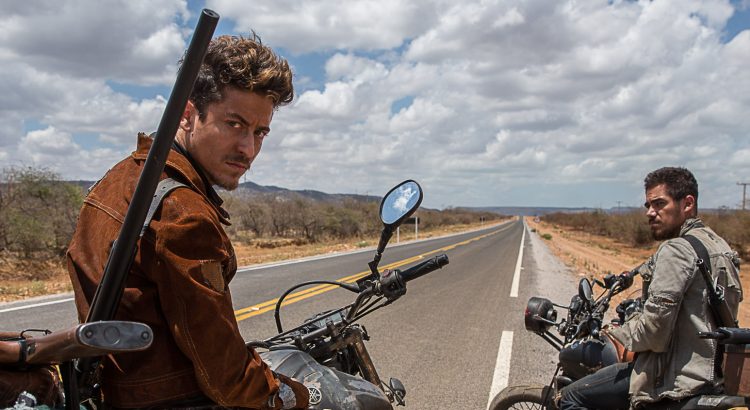 Here’s my first review from the Tallinn Black Nights Festival (or PÖFF as the Estonians call it).
First published on Nisimazine here. Video Review below.

Brazilian Mad Max on a holy quest in the moral desert. Cool or Pretentious?

A head-on collision is just the start into Homero Olivetto’s wild debut feature “Holy Biker”. Two 20-something girls drive through a South Brazilian desert in the middle of the night and suddenly get caught up in a car chase between a biker gang and the police. Only one of the girls, Tereza, survives the crash in this opening sequence. Together with her we tumble into the strange world of this modern western.

The easy riders of this gang are on a mission to return a holy saint, or rather her statue, to the right place. Then, according to a prophecy, the rain shall come – and wash away all the sins of this desolate place, one might add. Their leader and preacher – they call him Our Father – has been killed in a shootout. Now Ara, a bearded Brazilian Mad Max character, continues to lead his devoted bikers on the path of rebellious righteousness. At his side is the fascinating, but slightly neglected character of the fierce biker Severina, the female counterpart to the passively-beautiful victim Tereza.

For this group of desert outlaws, their belief in God seems to be the strongest weapon. At one point an old woman tells Ara to have faith. He just replies “That’s all I have. Faith.” So for all its brutal western setting, there’s still higher moral ground to be reached. We’re not in the post-apocalyptic wasteland of Mad Max yet. In this sense the film is much closer to the Alejandro Jodorowsky’s crazy religious feasts of ideas in The Holy Mountain, or even more his acid western El Topo. When the biker gang seeks wisdom from a hedonistic sorcerer, he even looks like one of Jodorowsky’s characters and utters similar mysterious riddles.

Olivetto’s story is perfectly straightforward. He outlines the narrative path through the desert right from the beginning: the outlaw bikers versus a brutal mafia-like villain who tells stories of cannibalism and sends the cut-off heads of his victims to the sky with a balloon. Thankfully, the director does not overload the images of his story with political allegories or supposedly meaningful dialogue. Stripped to the narrative minimum, this debut tries to score with distinct visuals. And here it probably divides its audience into those who embrace the coolness and those who see it as pretentiousness. It is a thin line the director is walking with his DoP Marcelo Corpanni. From time-lapse to slow-motion shots to vertigo zoom close-ups of the characters, everything is done to heighten the somewhat campy style, mostly not used excessively, rather serving the narrative. Together with the grim music, the dirty chic of the design, the overall barren setting with its scattered thorn bushes and wind energy parks, helps to create the right atmosphere for the story. So Holy Biker is a compact genre film with an unconventional combination of ideas, a fast-paced rhythm and enough surprises and suspense to keep audience entertained.

“No man is happy until he’s dead” one of these surreal cinematic characters says. And considering the body count of the film, a lot of them become happy on their ride on desolation row, which, as Western aficionado and Christian poet Bob Dylan tells us, is a circus. “Everybody is making love, Or else expecting rain. And the Good Samaritan, he’s dressing. He’s getting ready for the show.”